The Mercedes team boss, Toto Wolff has turned down a request to speak with the FIA race director Michael Masi. The two had been in talks after Max Verstappen’s high-speed crash at May’s Azerbaijan GP left debris on track and led to a number of safety concerns raised by drivers. 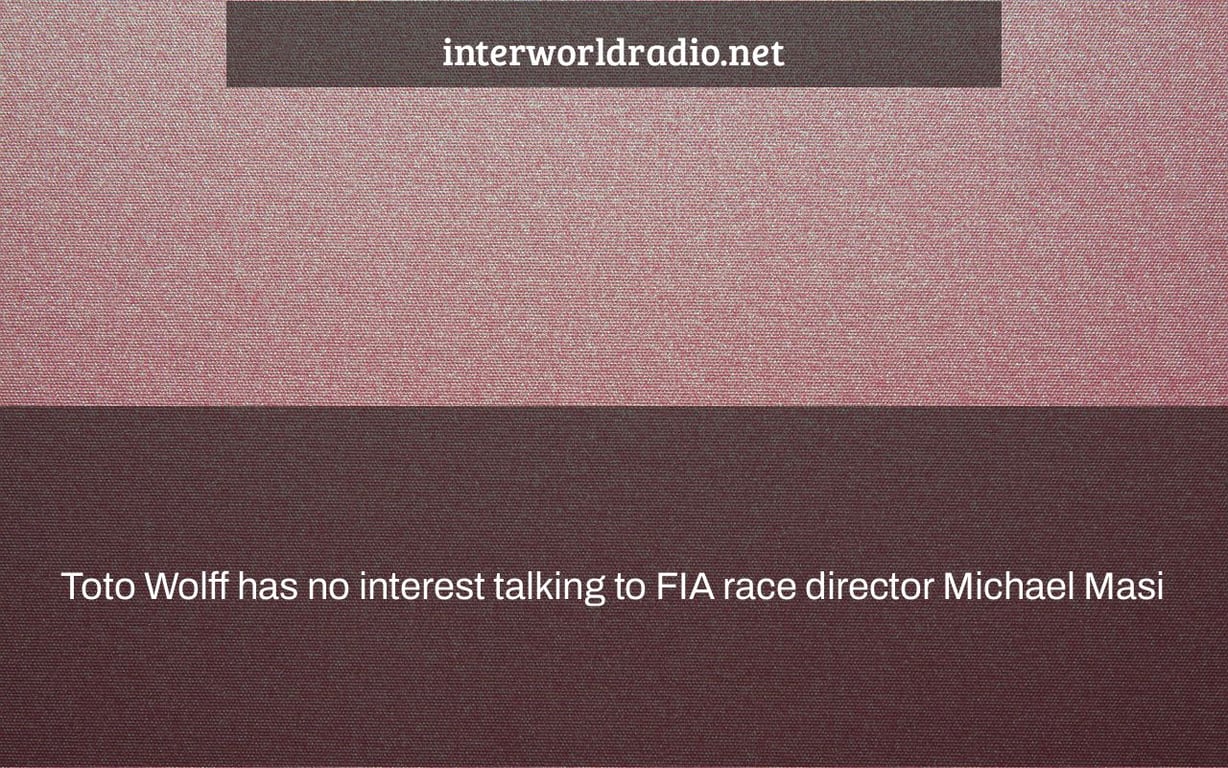 Toto Wolff, the Mercedes team manager, has said that he has no wish to speak with FIA race director Michael Masi, claiming that his beliefs and sense of integrity are “incompatible” with Masi’s judgments during the title-deciding Abu Dhabi Grand Prix.

One of the greatest debates in Formula One history surrounds Masi’s participation in Max Verstappen’s championship triumph against Mercedes driver Lewis Hamilton.

To guarantee the championship was decided by one last lap of racing rather than behind the safety car, the FIA race director disregarded key sections of F1’s safety car restart process. Verstappen was given the chance to catch and overtake Hamilton as a result of the decision, which he did on the penultimate lap to claim the title.

Mercedes objected to the FIA’s conduct of the race, but the race stewards rejected their claim. The team subsequently filed an appeal, which it eventually abandoned on Thursday in the hopes of being able to hold the FIA accountable without having to go to court.

However, when Mercedes withdrew their appeal, Wolff said that he would collaborate with the FIA on its intention to probe the last few laps, but that he had no wish to talk with Masi personally about the matter.

Wolff said, “I’m not interested in having a dialogue with Michael Masi.” “The choices made in the last four minutes of the race have knocked Lewis Hamilton out of a well-deserved world title.”

The FIA race director has come under fire for the way the Abu Dhabi Grand Prix ended. Getty Images/Andrea Diodato/NurPhoto

“In particular, his driving in the past four races was perfect. On Sunday in Abu Dhabi, he enjoyed a dominating lead from the start. He won the start and never surrendered the lead again.

“It’s also wrong to rob him in the last lap of the race.” That is why, from a personal and professional basis, I am unable to… my beliefs, my sense of integrity, are just incompatible with the choices taken on Sunday.

“And it is up to the FIA to determine how these choices, these scenarios, may be avoided in the future.” I would have been perfectly happy if Max and Red Bull had won the championship on Sunday, and this issue has nothing to do with Max; he is a deserving winner, and his driving is amazing; Red Bull are strong rivals, and I have the highest regard for the people who work there.

“They don’t have anything to do with this.” But I’d give everything to be able to sit here and escape all of these debates and the harm that has been done to the sport as a result of Sunday’s arbitrary decision-making. The FIA must make a decision on how to proceed.

“Over the past few days, we’ve had a positive communication with the FIA, the commission is in place [to examine what occurred], and I have hope and believe that, along with other teams, we’ll develop the necessary judgments and steps to prevent such a situation in the future.”

“As a result, unambiguous measures must be in place prior to the start of the season so that every driver, every team, and the spectators are aware of what is and is not permitted.”

Wolff was also asked whether he thought Masi should step down as race director.

“It’s not only about changing the race director; the whole decision-making mechanism has to be overhauled,” he remarked. “As I have said, I believe the race director is under a great deal of stress, some of which is due to our own mistakes.”

“I would have preferred more consistent decision-making to prevent many of the conflicts that arose over the year, but the most recent one was simply a choice that had the most effect.” From a sporting standpoint, it was disastrous since it determined the world championship.

“You could say the whole season was back and forth, with us being on the receiving end at times and being more fortunate at others, but I am certain that all of us, the teams, the drivers, the FIA, and the sport, can reform the way choices are made and make the sport better.”